Poynting MinePoynt antennas have been the subject of testing and evaluation in various underground demonstrations and deployments over the last several years.  Although the results are usually shared with Poynting, Poynting are usually prohibited to publish the details of the tests. However, in a select number of cases, Poynting are able to share some limited information. Poynting provides an overview of tests performed on both their MinePoynt “HELI” antennas and their new “MiniHELI” series of antennas.

It is important to note that MinePoynt “HELI” antennas and Poynting’s new “MiniHELI” series of antennas are Poynting registered designs and/or patented technologies based on circular polarised antenna designs. These antennas are best suited to mining and other types of harsh RF environments. In some cases where conventional antennas are used, the RF propagation is quite limited and diminishes rapidly down the tunnel. Read Poynting’s FAQ which explains the benefits of circular polarised antennas for tunnels.

Tests were conducted by Ya Batho at a coal mine in 2017 to test VoIP services in the mine. Ya Batho’s intrinsically safe (IS) WiFi M-Cube Access Points were used in this test, connected to Poynting’s MinePoynt HELI-3 circular polarised 17.5dBi antennas in a 2×2 MIMO configuration. Measurements were conducted with Ya Batho’s IS Android tablets. The AP was installed at the incline sub feeder, with measurements conducted down the conveyor belt pathway to both VoIP handsets and in a ‘backhaul’ AP to AP scenario.

This area of a coal mine is quite undulated with some sections under heavy water, obstructed with metallic objects which create an RF unfriendly environment. This is where circular polarised antennas such as the Poynting MinePoynt “HELI” antennas thrive. 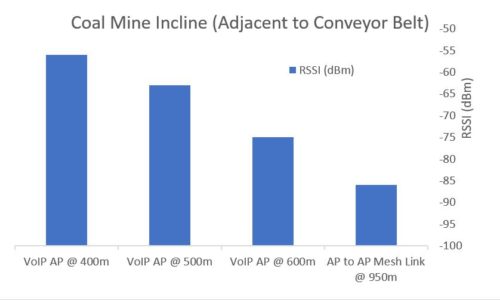 Test results in the AP scenario, measured to a VoIP tablet, resulted in sufficient RSSI levels at 600m away from the AP. A mesh link in the same area was tested successfully at a distance of 950m apart. The mesh link was configured at 2.4GHz WiFi band and achieved a throughput of 10 to 13 Mbps.

In a similar test setup as the previous coal mine, tests were performed in a gold mine to assess the RF conditions in the tunnels of a gold mine. A set of Ya Batho M-Phones (SIP VoIP Handset) was configured to use PTT (Push-to-Talk) to communicate with each other, with their M-Cube Wireless Access Point as the WiFi network source.

A summary of results can be seen from the tunnel layout illustration above, where RSSI levels of -59 were achieved at 459m away from the access point and -72dBm at approx. 660m away. These tests are important to determine the number of Aps to deploy and their optimal locations.

A test was performed in a Platinum mine in 2018, in a tunnel of approx. 3m diameter, where ScanRF Projects, Rajant Corporation and Poynting participated in conducting the tests together with the mine’s representitives. A prototype antenna was tested, which was nicknamed the Poynting Quad HELI, which is now released as part of the new MiniHELI range. This antenna is a 2×2 MIMO 2.4GHz + 2×2 MIMO 5GHz circular polarised antenna. The tests were all performed using the prototype antenna, connected to a Rajant ME4 kinetic mesh. 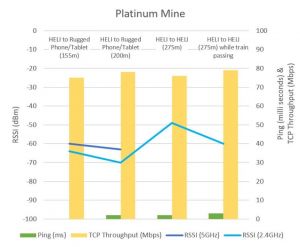 The first two measurements in this test were recorded using test devices with integrated antennas. At approx. 155m, an RSSI of -64dBm was measured on 5GHz and -60dBm on 2.4GHz. The test point was moved to approx. 200m with RSSI results of between -63dBm on 5GHz.

A secondary set of measurements were taken, this time from Rajant to Rajant, in mesh mode with the same prototype antenna at the one end, but with a 2x HELI-3 (2.4GHz only) at the far end. The RSSI measured with the Rajant ME4 was -49dBm and 2ms ping time at that distance, in a non Line-of-Sight (NLOS) scanario. Directly after the tests were performed, a locomotive with several carriages passed through the narrow tunnel, which proved to have little affect on the system performance. The radio connection between the two Nodes remained at excellent levels i.e. RSSI of around -60dBm with a ping of 3ms.

In this test scenario, where 2.4GHz + 5GHz antennas were used, it can be seen that 5GHz performed better. This antenna is now available in uni-directional and bi-directional configurations. These antennas are available in a complete assembly, which provides space for the Rajant ME4 / LX5 and other types of radios and nodes. Please see Poynting’s Product Brief.

A second test scenario was established within the same previously mentioned mine. This time in the active stope area. The test was set up using a Rajant ME4 node, again in AP mode, connected to the prototype 2.4GHz and 5GHz MIMO antenna. Test measurements were performed using the same test devices with integrated antennas. 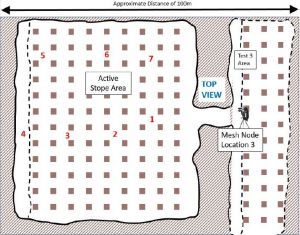 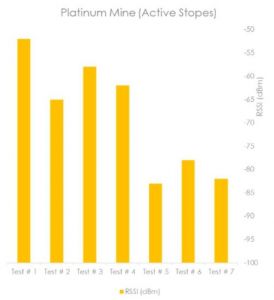 Measurements at the sample points indicated that the signal originating outside was sufficient within that area, proving that a localised AP/Node would provide excellent telemetry & automation abilities for a connected active stope area.

Further tests performed by ScanRF Projects and Rajant Corporation representatives in 2019, this time in a coal mine with much larger underground tunnels, which also showed exceptional results.

The test results in this case were performed between two Rajant mesh nodes, each connected to Poynting’s HELI antennas in a 2.4GHz 2×2 MIMO + 5GHz 2×2 MIMO configuration. Only the first test measurement was in a Line-of-Sight (LOS) scenario, after which the tunnel bent and twisted in various directions, including up and down inclines. 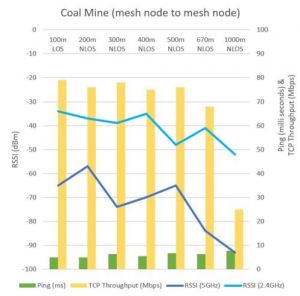 The test measurements provided interesting results of distance vs. signal strength and throughput achieved throughout the test locations. In this ‘backhaul’ meshed RF link, excellent results of 68Mbps TCP throughput achieved at around -52dBm at 670m apart – without any other RF nodes in between. In this test case, 2.4GHz performed better than 5GHz. The tests were limited to 1km, to determine the extent of the RF propagation, at which reasonable results were also achieved.

The choice of suitable antennas for a mine (and other types of mines & tunnels) help the Industrial IT team to achieve the best possible propagation in the underground deployment, thereby ensuring the optimal network topology from a cost effective perspective, while providing a rugged underground communication network to enable industrial quality RF network rigidity, stability and performance.

Poynting offer a range of underground/tunnel antennas, namely the HELI and miniHELI series. Branded as...

Internet Connection For Solar Team Twente In The Australian Outback

Madison Technologies today announces their partnership with Poynting Antennas, a new range of industrial and...