Home / Optimising an Energy Storage System with an IIoT Solution

Optimising an Energy Storage System with an IIoT Solution

This Moxa case study demonstrates how Industrial IoT can be used to optimise energy storage systems.

A detailed analysis of how turning relays on and off at different temperatures affected the amount of power being generated as well as the life of the battery allowed the energy storage system provider to optimise the algorithms used to control the charging and discharging of the batteries. In particular, the algorithm was tweaked so that relays were switched on and off (i.e., the batteries were connected and disconnected) at the optimal times based on the batteries’ temperatures.

The ioLogik E1242-T and ioLogik E1260-T remote I/O devices with built-in Ethernet switch, and the UC-8112-ME-T wireless-enabled DIN-rail industrial computer were the best fit for this project.

The system provider can retrieve the data from the UC-8112-ME-T at any time and then use the data as an aid in determining the best charging/discharging methods. All three products have a wide operating temperature design, which provides an added benefit since the system provider can use a cost-effective airflow cooling system instead of an expensive HVAC system. 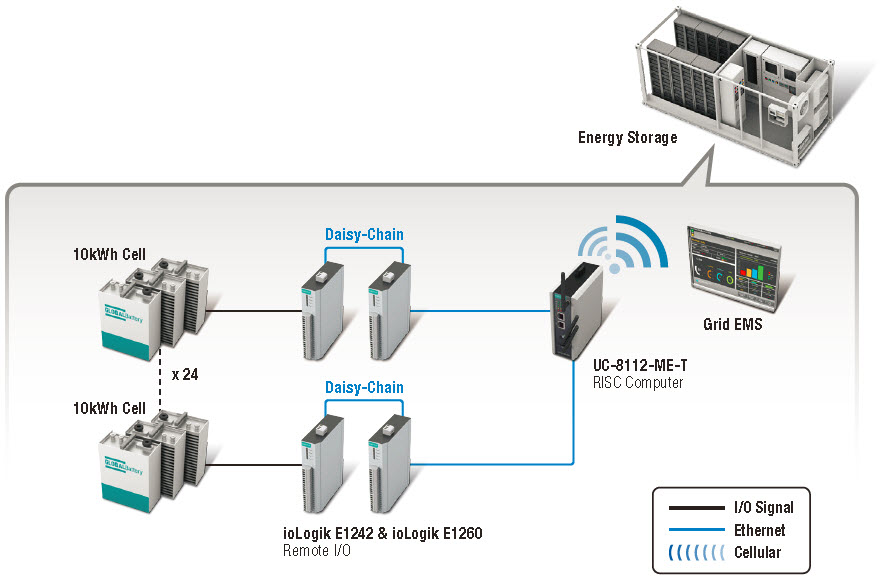 For more information, visit the following product pages on the Moxa website:

Gain instant visibility of your network’s Security with Moxa MXview

Get the Benefits of Simplicity